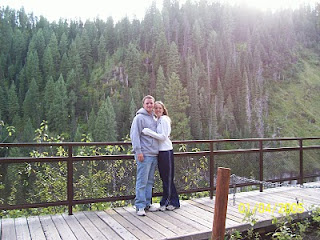 This is a pic from our honeymoon - beautiful country up in Island Park and Yellowstone! We had a blast!

Justin and I have been married for two weeks and are loving it. Yes there is a lot of learning and adjustments, but it is so worth it. Most of the adjustments we find ourselves laughing about.
I'll share a quick story.
I grew up in a house we used outside cooling as much as possible. We opened the windows up each night and closed them in the morning. The more the windows the better the airflow and the cooler the house would stay for FREE!
One night I went around doing my normal routine of opening all the windows. About thirty minutes or so I was clueless when Justin went around closing all the windows. A few minutes later I thought to myself, "I thought I opened the windows, hmmm, must not of." Yep, I went around opening the windows again, as I was doing so Justin asked, "Opening the windows I just shut". When I realized this it all made sense and we had a good laugh about it, then later discussed why I liked them open and why he liked them shut. Ha ha, good times.