April 21, 2016
Sam does not have a cross bite or an appliance in his mouth anymore! Dr. Kersey and his techs did an amazing job and made Sam feel like a rock star every time we went in. Sam did a great job to let them work on him. He had the appliance in for almost a whole year. When asked how it feels Sam said, "It feels new." He almost didn't want to get it out. The day he had the appliance put in he was in tears because his sandwich got stuck in it. He cried, "I want it out!" But he stuck with it and was able to eat anything within weeks. Yes he is dressed up as Super Why because he knew they would make a big deal of it at the dentist's office. Today we also got his 4 year old immunizations. It was not the little pinch Elmo told us it would be. It hurt really bad and Sam is super glad he doesn't need them again until he's 11. He had 4 shots and they hurt! I felt bad for not knowing and better preparing him. Despite all this he was very brave and didn't cry until all the shots were in. It broke my heart. I'm also glad it doesn't need to be done again for a while. 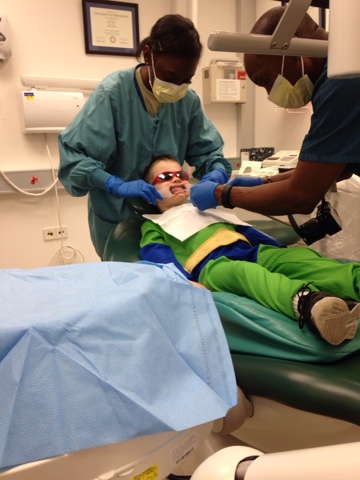