November 01, 2012
This year was a very different Halloween for each of us in quite a few ways. In preparing for it we had Sam in his costume a week in advance..... 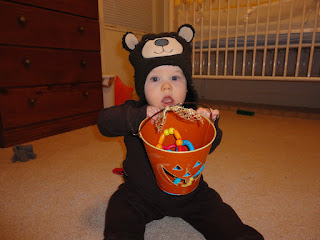 Justin and I attended a Halloween Party the Saturday before, helping us to have costumes ready

Can you guess who we are? 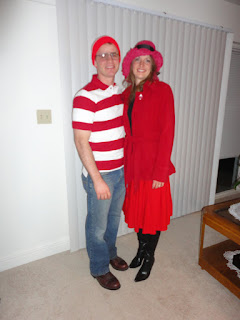 Justin, you can, what about me?

"Does Waldo have a wife?" Was the question I got most of the night -- ha ha.

We were joined by our good neighbors the Zambranos and we thank the Kearns for such a fun party! There were a lot of fun couples costumes. 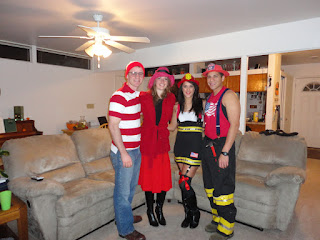 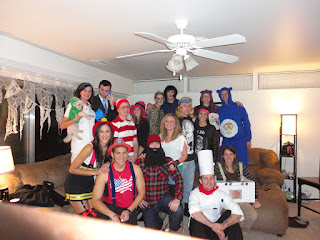 Tuesday, Oct 30th, I attended the Zombie Fun Run -- Walked the 1 mile with Minta and Jessica -- which was fun and entered Sam into the Costume Contest at the Fall Festival.

That night is when we discovered red dots on Sam's tummy.

The weekend before Halloween Sam had a bit of a fever. He was 103+ on Sunday and so we took him into the doctors. We gave him Tylenol for the rest of the day and then his fever was gone, but he was still not sleeping very well at night and he didn't have much for an appetite (very unusual for Sam).

For Sam's 1st Halloween he had the Chicken Pox - Wrong, he had Roseola - this is only a rash. Ha ha, shows how little I know. :) Poor little guy.

He did watch several Trick or Treaters come to our door. I have to say Sam loves visitors and is quite the social kid.


Now this Halloween was different for Justin and I because we have never had Trick or Treaters. I had this great idea for what to give out for the treat -- Nacho Cheese popcorn and Squeeze its. I had our bowl filled more than a week ahead of time. Justin told me the popcorn wouldn't go. He said our bowl would be a disappointment for the kids. I didn't buy it until our first trick or treaters came. Justin told me, "Watch their faces". He had talked me into seeing their disappointment and then they all took the squeeze its. I told Justin he better head to the Commissary and get us something else. While waiting for him to go more trick or treaters came and some took the popcorn. After he left, there were some kids who were super excited about the Squeeze its and the popcorns were being taken as well. Some parents were glad for the popcorn. Justin came back with more Squeeze its and a bag of candy just in case. It was a good thing, because we ran completely out of both. I felt bad for the kids who came to our house later. If we became known as the "Squeeze it" house, they were sorely disappointed. :) I didn't realize how much candy one house gives out. A great learning experience and lots of fun!