What plane is Justin going to fly next?

March 08, 2013
The week before Track Select we were pleasantly surprised with a visit from the Schmidts! It was so fun having them in our home. We were able to take them on a short driving tour of the base, give them a chance to fly in a T-6 simulator, and visit the Cherokee Museum. It was a great way to relax and have fun before the next phase of pilot training came

I again did not take many pictures, but here is what I have.
Richard and Justin were able to go see a T-6, T-1 and T-38 up close. It was rather cold and so Sam and I, later joined by Jo, went to the car. We had a jam out session and Sam got to play with all the buttons and knobs. 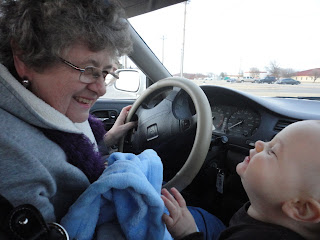 We are so blessed to have such supportive family. We love getting to see them whenever we can!
The Schmidts were here from Thursday night to Sunday.

The Day: Monday, February 11, 2013
Track select was a day full day of fun events. The Instructor Pilot's and their spouses provided us with breakfast. We had a chance to take pictures by the T-6, and I got to try my skills at flying a T-6 simulator. Let's just say even with Justin's help I crashed at least twice. But it was a fun and eye opening experience for me. 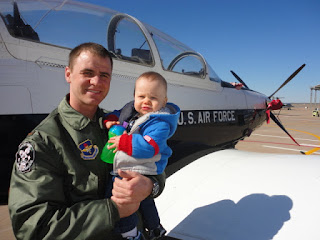 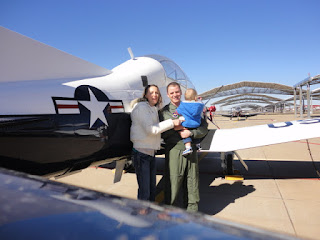 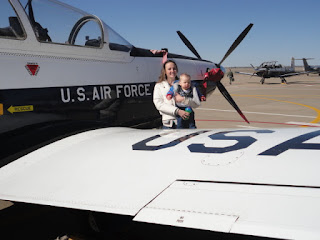 We then had pizza and then the actual track select meeting. The class before us assigned only 1 Helicopter and 1 T-38 (fighter plane), the rest were T-1 (cargo planes) so our class prepared for the a similar experience. They announced in alphabetical order. By the time it was Justin's turn we were all amazed at how many helicopter and T-38s had been assigned. The possibility of Justin getting his first pick, T-38s, seemed greater. Because of this, we both took the assignment to T-1s pretty hard, even though we knew we would come to enjoy it and that God's hand was in it. There were 4 helicopters assigned and I lost count on the T-38s. We were happy for everyone, but  I was especially sad to see the class be split up. In our short nine months together I really came to rely on the spouses like family. Change is hard, but so good for us. They say the Air Force is small and so we hope to see them again during our career in the Air Force. :) We hope the best for all of the class members!