October 18, 2012
Justin flew the T-6 all alone, no instructor in with him to take over if needed. I really tried not to think about the "what if". Justin's instructor also assured me as I watched him taxi towards the runway that the solo is for confidence purposes only. His IP (Instructor Pilot) was nice and seemed to smile a lot as he watched Justin go through the check lists. I was so glad that I had not missed this chance to see Justin drop off his IP and taxi away to fly solo.

I almost missed him. One of his classmates had helped me find his tail number and brought me out to watch for him. We stood there for about 10 or 15 minutes and thought we had missed him. We went back inside, but I decided there was no point for me to sit or stand around inside if I could do the same outside and possibly see Justin. I headed back outside. No more than a minute after I stepped outside I saw his tail number 820 Blue. Wow! That was a blessing.

It was a beautiful morning for a flight; clear skies, light breezes and perfect temperature. 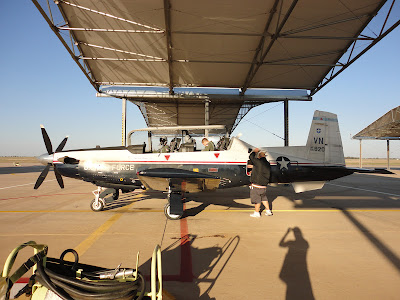 Justin pulled up, shut off the airplane and allowed his IP to get out.  During this I snapped as many photos as I could. But still didn't document as well as I hoped. 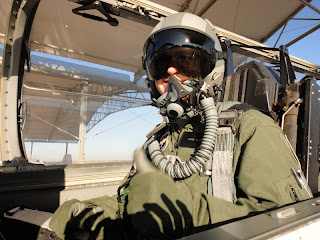 Justin suited up and  ready to fly his first solo of the T-6 -- woot woot - I was feeling butterflies!

In the Air Force there are a lot of traditions -- one of them is the solo dunk tank. Before the first pilot soloed in Justin's class they met together and painted the tank. When the pilot completes his flight, his classmates are to catch and throw him in the dunk tank, kind of like saying "Good Job and welcome to the solo club". Now if he can make it to the flight room before being caught by his classmates he can surpass the dunk and they owe him a 12 pack of his drink of choice. Back in the day it was pretty exciting. We imagine there were intense wrestling matches, but with safety laws, wrestling is no longer allowed. Justin walked to the first building took off all of his gear, then came out by the tank. There, seven others were gathering as well, taking took their boots and patches off. I did get to see one pilot try for it and she almost made it. We watched as they dunked each one, and then finally came to Justin. I didn't get very good pictures or video - dang it! 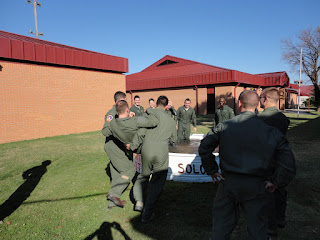 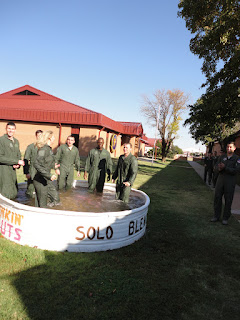 I did test the water before Justin came out, it was really cold - I was sure glad I wasn't being thrown in. 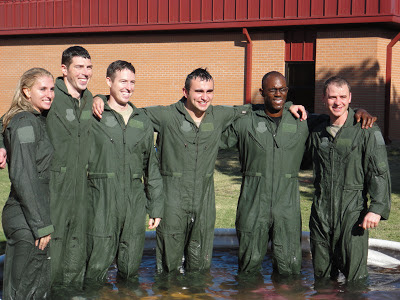 Quite a big bunch who soloed this morning together. Congrats!! A major milestone in this year of pilot training.