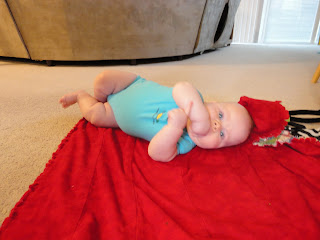 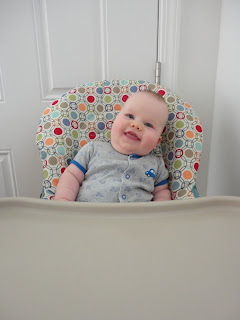 Rolling over (back to tummy):
On Sunday we were at a BBQ with several of Justin's classmates and he rolled over! He had rolled over a couple of weeks before but not since. Monday he rolled over several times, I was watching and setting him up to do so as much as I could, and he continued. I think it was Wednesday night that he woke up twice screaming because he had rolled over on his tummy.

First Solids:
1st feeding: Thursday - August 2nd - I can't say that he actually ate it though. It was drizzling down his chin instead of being swallowed. He was trying to suck, but that action pushes it out of his mouth. This first time feeding he wasn't super hungry either.

2nd feeding: Sunday - August 5th - He was hungry this time and Justin tried different things in order to help him be successful. I thought Sam might be fussy or screaming because I knew he wouldn't be able to eat it as fast as he drinks his milk. (like 4 or less minutes on each side) but he wasn't. He was completely interested in what was going on and trying to eat it. He did darn good. We label him a quick learner! :) Still lost a fair amount of it on the bib, but not bad

3rd feeding: was tonight August 6th - It was a huge success! 1 Tbsp of rice cereal devoured by Sam with an increasingly smaller wet ring around his neck from the cereal. He has got it down. Justin puts the spoon in his mouth and Sam has learned to suck it out and swallow. He is very attentive and loves having his dad feeding him. It's quite entertaining too -- our FHE activity tonight.

I can't snap too many pictures can I?