May 13, 2013
Sam says "Dad" now and has come to really like his dad's motorcycle. I couldn't resist taking this picture of our walking Sam watching his dad leave for work. He was talking and pointing at him all the while, wanting to join dad on the motorcycle and when dad and the motorcycle disappeared he cried long and hard. This morning he stood in the same place and did the same thing. I tried to make it happy for him, asking him to wave "bye, bye" but he wouldn't do it. He stood and watched babbling and asking me to help him join him and then cried. I picked him up and explained that dad went to work and he would see him later. He had such big tears. I got him back to eating his lunch, but it took him a bit to recover. He did recover and we had a great time at the park with Leo. They were both tuckered out and are taking their afternoon nap right now. I think this has become Sam's little perch. A place he will be often saying hi and bye to the people who come and go, especially his dad. 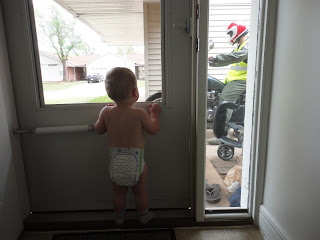